A place to discuss subjects related to those who prefer to take those longer shots. Sponsored by European Long Range Hunting and EuroOptic

Fellas,
I have had a 6.5-284 barrel for a few years and have used it for general hunting with my z6 2-12 scope, I am wanting to learn and practice longer range hunting on goats, pigs and fallow deer here in Australia, the scopes I am thinking of for this purpose are the Z5 3-18 or 5-25 or a Z6 in 3-18 or 5-30 with the ballistic turrets, I don't want to go to a dial up setup like a Nightforce, looking to shoot out to around 600 metres, interested in your thoughts on scope options cheers David

Davo 6.5 wrote:Fellas,
I have had a 6.5-284 barrel for a few years and have used it for general hunting with my z6 2-12 scope, I am wanting to learn and practice longer range hunting on goats, pigs and fallow deer here in Australia, the scopes I am thinking of for this purpose are the Z5 3-18 or 5-25 or a Z6 in 3-18 or 5-30 with the ballistic turrets, I don't want to go to a dial up setup like a Nightforce, looking to shoot out to around 600 metres, interested in your thoughts on scope options cheers David

I have the Z5 3-18 and 5-25 both with the 4W reticle and BT dials. I like them both and have used them out to 1,000 yards. The turrets are 1/4 MOA and have 56 clicks in one revolution of the turret, so you should easily be able to make it to the distance you intend. I don't find the difference between 18 and 25x an issue, either works just fine. The 4W reticle is 2 MOA wind hash marks which is about as close as anyone can read the wind anyway, they work great.

One word of caution though, the programs that Swarovski uses to cut the turret dial is simplistic, uses just the bullet and velocity you specify and was not close enough to actuals to suit me. I finally got turrets made which I dictated 100=0 clicks, 200=4 clicks and so on to get it right. Took three attempts, they were quite stubborn about it. However I will say they were plenty good at 400 yards and only a little off at 500 and 600 yards it wasn't until further that they were off enough to miss a big game animals vitals.

I have no experience with the Z-6 so I'll leave that for someone else.
Robert J Stokes
Top

Bob do you have only one turn on those knobs? 56 clicks is 12,5MOA and that is not enough for 1000y or have I missed something?
http://green-brotherhood.com/
Top

I used a leupold Mark 4 for my long range shooting but for 600m shooting unless you are only ever shooting at 600m you will need an adjustable turret scope so you can dial in ranges and cross winds.

On the cheapish end the Bushnell tactical are ok, the leupold mark 4-5 etc are great and if you have the cash the S&B pm2 is the goods, but there are some other top choices too.

I don't like going over 20X due to heat shimmy and aim time due to the slightest bit of movment shaking the whole sight picture up.

It will also depend on if your going to hunt with that barrel too, if you are then get another scope mount for the new scope as tactical scopes are awful to hunt with so keep the old or a 2nd scope for hunting with.
I'm soft and I don't care.

Dave any scope that's designed for long range is fine as long as the turrents are accurate for dailing. I've got a March as well as NF and just quietly I would pick a NF over the March more for functionality. The glass on a March its top stuff but their zero stop is a bit "how Ya going". The NF NSX zero stop works extremely well and are simple to set up. I found the BT are set at set ranges and there's no in between. You can get turrents made for them but not here in Australia, you would have to get them made in the US. You just have to make sure your ballistic data is spot on as the turrent will be made to your spec's. The down side to them is they will only be set up for the one projectile. I myself like the NF NSX zero stop in 5.5-25x56 is a good size and the 30mm tube is easy to get in Blaser mounts. Just get a bubble indicator for any shots at or over 500m as that "cant" can be come a miss. You can get them that just clip onto the scope itself and work great.
The other option is to get a Burris eliminator and it does the work for you once it's set up. But you can make up a dummy card and do hold over but the only way to get out of dailing I can think of is the Burris eliminator or really good mildots.
Measure it, when it’s on the deck
Top

As for the BT system you have the option of keeping the rings that you set accordingly to what the Swarovski ballistics calculator indicates once your load is either pulled up or load info (in the case of a handload) entered into the calculator. The custom drop on ring that everyone refers to replaces these adjustable rings and it's nice and easy to read with the numbers indicating each range as the computer determined it to be. And as Robert Stokes indicated they went with their computer ballistics off his loads instead of what he found was factual. I can see where the two wouldn't jive because of possible barrel lengths and lots of other factors that enter into the picture once you get out to 500+. The book and reality are usually not on the same page.

FWIW I will order a couple of drop on rings once I get some actual velocity info from live shooting, not the ballistics according to the manufacturer. Figure for hunting out to 500+ they'll be fine and a lot easier to dial in than the 4 dots on adjustable OEM ones.

If I recall correctly Swarovski has always added the byline that you are to verify the settings by shooting at the prescribed ranges and not just trusting that they're going to be right. They should have also added that you have no business shooting at game animals unless you're proficient and practiced at that extended range in the first place. Reckon they don't want to unnecessarily step on any toes so they don't mention that.

As for the Burris Eliminator III. I have one and have not set it up. But while at the Dallas show I looked up their rep and quizzed him on the accuracy of the system. He was good enough at dodging direct questions and didn't give me what I wanted but it was painfully obvious that they are going to be accurate to a point but that's it. In my case using a 7 mag with 150 Nosler BT factory ammo I would use the 113 setting in the scope and it would be dead on. Excuse me but we're back to the book and reality. I'll give them base accuracy like the BT system good for 400-500 yards which covers most of us. It'll be interesting to see where it prints at 700-800 yards. There is NO additional adjustment in the scope if those suggested numbers don't match up exactly to your load. You then try those numbers next to 113 until you find one that works better. Where it'll have an advantage is if the built in rangefinder works like it's advertised to do you should have better odds of putting the bullet where you hope to.

The only system I've seen so far that apparently really does what it says in the world of long range shooting is the Tracking Point. And the shooter still has to do his job to make it work right.
Top

Relating to the Z6 and the Z5. Both scopes have the same mechanical systems based on coil springs and will withstand heavy recoil. The Z6 models in the 2.5-15x44 and UP have HD lenses which help in low light. The z6 1.7-10x42 and 2-12x50 do not have the HD lenses. Having owned several of each of these models my eyes can't really tell the difference in low light. I tend to still think the 2-12x50 is as good in low light as any scope I've owned. Might have something to do with having fewer lenses for the image to get through.

If they made the z5 with illumination I probably wouldn't own a z6. They are very good scopes so don't sweat the difference unless you want that red dot in low light then you have to go z6i. I hope to add one of the 5-15 BT 4W models this year.

The difference between the z6 3-18 and 5-30 certainly doesn't appear to be that much. You're getting more power but it's definitely not like 2/1 as one would think. I don't know how they do it but the 5-30 is as clear a scope as anything in their line and on the lower powers is simply phenomenal in low light. I tend to think it's better than the 3-18 in the same situation. Done quite a few comparisons and keep coming up with that same conclusion. The 5-30 is like a half inch longer and an ounce (if that) heavier. For the little difference in cost it makes sense to do the 5-30. You may never need over 15-20 but if you do it'll be there.
Top

I would definetly go with the Z8i as it is the most brilliant scope on the market - add some SR-Rail and BTF and it is perfect: 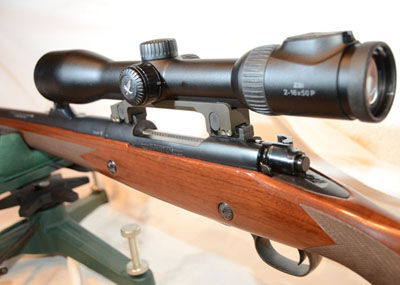 life is too short for not having the best equipment You could buy...
http://www.titanium-gunworks.de